You are here: Home / New Books / When Darkness Falls: The Trilogy By Allie McCormack 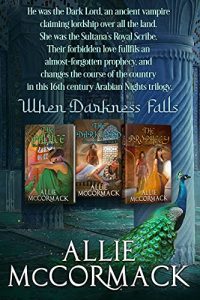 About When Darkness Falls: The Trilogy By Allie McCormack

The Full Trilogy Is Now Available In One Book!!

Ruled by a gracious, wise Sultana, the humans of the great desert city of Al Khair dwell in uneasy peace with the vampires and demons who claim the lands as their ancestral homelands under the leadership of an ancient, powerful vampire. Their shaky truce becomes strained when a young human woman arrives from distant lands.

Orphaned since childhood and outcast, Alyssa joins a caravan to the fabled Al Khair where she seeks only to make a new life for herself. A life that quickly becomes complicated when she draws the attention of the Dark Lord himself.

A thousand years ago, Lord Damien permitted the humans to build their city. When he senses a new, immensely powerful magical being in the land, Damien suspects the humans of plotting to overthrow him. Furious, he searches for the source of this power, but he cannot stop thinking of the young woman in the tower who had seen through his glamour spell that cloaks him from humans.

When he discovers that Alyssa is the mysterious being he has been seeking, his determination to have her for his own threatens to pit the two races, human and vampire, against each other in all-out war.

A former career medical transcriptionist and disabled Veteran, Allie McCormack is now writing from home full-time. Allie has traveled quite a bit and lived many places all over the U.S., and also a year in Cairo, Egypt as an exchange student, and a year in Riyadh, Saudi Arabia under contract to a hospital there, plus a short stint with NATO while she was in the Army. Allie now lives in the beautiful southern California with her family and her two rescue cats.

Allie says: “A writer is who and what I am… a romance writer. I write what I know, and what I know is romance. Dozens of story lines and literally hundreds of characters live and breathe within the not-so-narrow confines of my imagination, and it is my joy and privilege to bring them to life, to share them with others by writing their stories.”