You are here: Home / Fantasy / When Willows Weep by G. Sherman H. Morrison 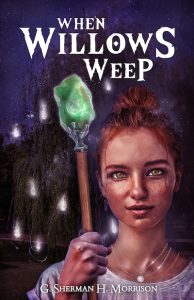 About When Willows Weep by G. Sherman H. Morrison

When Willows Weep is a contemporary fantasy novel about a twelve-year-old girl in the sixth grade of a Waldorf school who finds herself in the middle of an epic battle between good and evil. Discovering she has three divine gifts of Sight, Light, and Fight, Willow joins with others who are divinely gifted to face a rising darkness. Gehenna, a powerful demon with an army of bloodthirsty hellhounds at her command, is intent on destroying Willow’s school, the community, and the fae folk.

Sherman Morrison joined the gig economy as a freelance writer and editor for hire in 2011 and has never looked back. His first one-act play, CUFFED, was a top-three finalist for best original play in the 2008 New Hampshire Theatre Awards. When Willows Weep is his debut novel. When Sherman’s fingers aren’t flying across the keyboard of his laptop at his home in Keene, New Hampshire, he can be found performing on stage with a variety of amateur theatre groups in the Monadnock region, as well as singing and occasionally preaching at the United Church of Christ in Keene.