You are here: Home / Featured Books / While The Gods Slept by James E. Sanford, Jr. 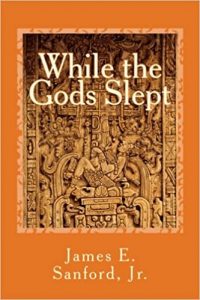 While The Gods Slept by James E. Sanford, Jr.

While the Gods Slept brings together many of the disparate anomalies, myths, and religious beliefs that confound and confuse those who would like answers to age-old questions. The story begins some four hundred thousand years into our past when a great civilization occupied this planet. After a great cataclysmic event, the few survivors begin a project to rebuild and repopulate the Earth. Their efforts are recorded throughout the book, but there is a parallel story. One that is taking place around our globe today. One man, Simon Krall, is discovered to have unique DNA. His DNA could hold the secret to increased longevity, immunity from most diseases, and the end to dementia and Alzheimer’s. He meets a beautiful scientist named Dr. Irina Bronstine, who wants to study his unique genetic make-up. When Simon travels to Washington, DC for some physical tests, it sets off a chain reaction of deceit, betrayal, and chaos. With Dr. Bronstine at his side, Simon travels halfway around the world to escape from an eccentric billionaire who wants to dissect his body for all its secrets. Pursued by cruel and merciless men, Simon begins to tell a tale that is so fantastic, that Dr. Bronstine believes he is crazy or delusional. Through Simon’s on-going chronicles, a few scientists begin to see the possibility that Simon was preprogrammed genetically. Aided by a growing number of scientists and researchers around the world, Simon’s story slowly comes out. He answers questions that have plagued curious minds for ages. Some of the answers are difficult to accept. Others are completely outrageous to his listeners. All responses he shares come straight from information programmed into his DNA thousands of years ago. Recorded history goes back a mere five thousand years, yet researchers keep finding evidence of older structures, cultures, art, and remains. Much of what is being discovered today does not fit the accepted account of human history. Debates continue to rage between archaeologists, paleontologists, geneticists, paleo archeologists, geologists, and scientists from many other fields. In addition to arguing amongst themselves, they are also bombarded with theories from those who believe ancient aliens created mankind. One theory, that has always held intrigue for those interested in the subject, is that there were great advanced civilizations here long before recorded history. There is a belief that an earlier society gave us our knowledge of engineering, math, astronomy, agriculture, and science. The question has always been asked but never answered. How did a group of nomadic farmers suddenly develop the skills and knowledge to build the great monolithic structures found around the world? While the Gods Slept gives plausible answers to the questions of the ages. It is an intriguing, fictional story wrapped in real history. The many characters in this book are based on real people who ask the hard questions about man, every day. Buckle up and hang on, you are about to go from outer space to the Earth and back.

Buy the book, and follow the author on social media:
Get This Fiction Book From Amazon.
Visit the Author’s Facebook Fan Page.

Author Bio:
A prolific writer since the age of fifteen, James Sanford has employed his prose to author numerous books, articles, stories, and one motion picture project. He sold his first short story to DC Comic Books when he was fifteen. His book, Storm Treasure, inspired an epic motion picture in 1999. Mr. Sanford holds a B.A. Degree in Mass Communications and an M.A. Degree in Communication Arts from California State University, Chico. He has also earned a PhD. in Education. For the past forty-two years, James has worked as a Teacher and Education Administrator in various venues, including Jr. High School, High School, Community College, and within the California Department of Corrections and Rehabilitation. He has taught Science, English, Creative Writing, Art, Reading, Adult Basic Education, and Substance Abuse Education. In all, of these settings, James has used his communication skills to teach, mentor, and coach individuals to express themselves through writing, music, poetry, and art. During his final years in education, James had the privilege of supervising and mentoring teachers who worked in jails and parole offices throughout California. After retiring from full-time employment, James has focused on his own creative endeavors and focused on his two great passions, travel and history. His most ambitious effort to date is While the Gods Slept. The book demonstrates his profound knowledge of history, as well as his love for travel. His capability to weave together real historical facts with plausible fiction is masterful. He, has the ability, to take Dan Brown’s and Clive Cussler’s historical fiction to a new level. His chronicles are riveting, and his characters are memorable. Mr. Sanford enjoys debating history, politics, and science. He claims it stimulates his writing process and forces him to keep up to date on various topics. His comprehension of what he studies, and reads is evident in every page of his books. Mr. Sanford lives in northern California with his wife and constant traveling companion Linda. They have two daughters, five grandchildren, and a great-granddaughter.