You are here: Home / Fantasy / Windward by S. Kaeth 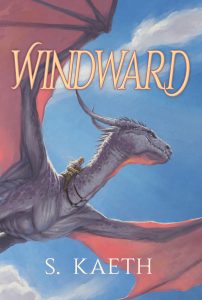 About Windward by S. Kaeth

When dragons fight, mountains weep.
In nests high in the mountains, dragons and dragonbonded share their lives, thoughts, feelings, and ambitions.
Palon and her partner, the dragon Windward, are renowned among their nest for their flying skill. Their days are filled with everything she loves, especially riding the wind. Even being tasked with teaching their way of life to Tebah, a rebellious newly bonded teenager, can’t bring her down too much.
But when treasures from the dragons’ hoards are found in Palon’s collection, her idyllic life comes crashing down. She battles to prove her innocence, while her every move is cast as further evidence against her. Tebah’s suspicion, homesickness, and defiance would be frustrating even in easy times. With Palon in the spotlight while her rivals smear her name at every turn and stir up plots of revenge, her teenage charge’s behavior proves dangerous.
Dragon tempers shorten, and challenges and disputes shake the ground. Palon will have to trust more than just herself if she hopes to once more own the sky.

Ever since a college professor told S. Kaeth she’d have to eventually focus on just one thing, she’s been dead set on proving him wrong.

From charging through the wilderness, wrangling alligators and snapping turtles, trapping and counting moles, or supervising prairie burns for college credits to doing research and training frogs, lizards, and a lungfish, she treats life as an adventure. She traded hikes, natural history interpretation boating tours, and creature encounters for the slightly-less-exotic-but-no-less-fun mammal training about the same time she began to get serious about her writing craft.

You can find her teaching herself languages and lesser-known fiber crafts, hiking, or playing Capoeira when she’s not practicing the fine art of weaving a tale.