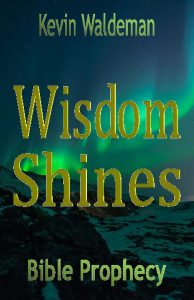 About Wisdom Shines by Kevin Waldeman

Newly inspired mysteries of God explain a wide variety of subjects, and with much scriptural support to back up the claims, the future is laid bare before us. Solid facts and diagrams clearly describe exactly how this present world will soon come to an end. With much of the Church having been misled by false doctrines, many are about to stumble unprepared into the dark days ahead. This book is for everyone who wants to hear more than just vague unsubstantiated theories based upon human wisdom. The subjects covered also include blood moons, asleep in Christ, and near death experiences, the 144,000 and 200 million of Revelation, and other fascinating signs in the heavens bearing witness to the predictions of Christ. There’s also more about the antichrist, hell, and real warnings from God instructing us how to behave in the years ahead.

As a youth I developed a deep disdain for the hypocrisy of the world, with philosophy and other religions just leaving me cold. If I were to say I was as good as gone, it’d be an understatement.
It’d be truer to say I was headed for disaster.
It wasn’t till the gospel was made available to me that I found the one man I could actually look up to, (The Lord) and at that moment my life dramatically changed.
After years of studying the scriptures, I eventually had to concede there were too many gray areas in my knowledge to be sure of being correct. At that point I let go of the subject of Bible prophecy
in the belief that the answers would only become known when God was ready.
A few more years went by, until one day when a series of thoughts passed through my mind.
Just like a lot of others, I often found myself talking to God in my everyday life, and on that day I remembered the conversation between Jesus and Peter. Right then, the Lord seemed to ask me, “Do you love me?”
I replied, “you know I do Lord.”
At that instant the rest of what he’d said to Peter also went through my mind, “Feed my sheep.”
At first I thought it was just a trick of the mind, and let the incident slip away into the background.
Over the next day or two I was surprised to find the term, “Feed my sheep” popped up again and again.
I still wasn’t convinced though, and decided it was probably just a coincidence.
But then for a few more days I was haunted by the term, “Put the trumpet to your mouth.”
It soon occurred to me that perhaps God really did want me to share what I’d already learned.
One morning I sat down with the intention of getting started, but doubts started creeping into my mind again, and I thought I was being silly.
I’d only just turned on the morning show, and the TV was over to my left. At the instant when I’d felt silly, I turned to look at the TV just as one of the guests raised a trumpet to his mouth.
From that moment onward I knew it was what God wanted me to do, and all semblance of doubt completely evaporated.
As soon as I began in earnest, the revelations just kept coming at an incredible rate. In fact, I was on the receiving end of so much knowledge that I could barely handle it all.