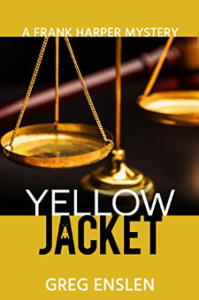 Getting away with murder…Newly sober Frank Harper is solving cold cases left and right, finally impressing his boss. But Frank’s unhappy–he misses the excitement of active police work. Meanwhile, in Cooper’s Mill, the sleepy Ohio town where Frank’s daughter and grandson live, things are heating up. Local man Joe Hathaway is about to stand trial for three counts of attempted murder, and Frank’s been called in to testify. Joe’s confident he’ll win. But, just in case, he’s got a plan–one that will finally bring Frank Harper to his knees.

Greg Enslen is an Ohio author of thirty-one books, including five books in the “Frank Harper Mysteries” series and three other novels. He also writes original screenplays and guides for popular TV shows such as “Game of Thrones” and “Mr. Robot.” His books are available from major retailers and on his Amazon Author Page at http://bit.ly/geauthor.

Greg lives in southern Ohio with his wife, three children, three dogs and an indeterminate number of cats. His interests include travel, reading, film and television, and yelling at various sports franchises. Greg enjoys writing late at night, after everyone else has finally trudged off to bed and the house is quiet. For more information, visit his website at gregenslen.com or check out his Facebook fan page at www.facebook.com/gregenslenswriting.