You are here: Home / Fantasy / A Burning Lion (The Queen’s Pass Book 2) by Tobias Weber 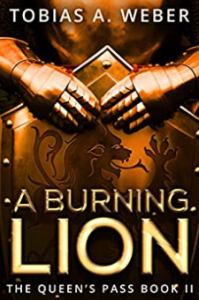 About A Burning Lion (The Queen’s Pass Book 2) by Tobias Weber:

King Crana of Ver returns to his capital, unsure what to do after learning he is responsible for Commander Samson’s death. With his kingdom at war, the king will need to be careful if he wants to warn the paladins of the impending danger.Arrangements are soon made to find Commander Samson’s killer, and to deal with the Brotherhood of Silence. Meanwhile, Ankita, Kristine, Noel and Lord Ellis are weighing their next steps, as they know they’re in great danger after being betrayed.Unaware of the conspiracy against the paladins, Master Kalani will have to make decisions which will decide the fate of the realm.

Author Bio:
From small to big. Tobias’ stories follow the same pattern like his own life. Raised in a little town near Frankfurt, he first moved into the city, then to Sweden, and later on to Brazil.

He writes Fantasy and Science Fiction. His books are inspired by the places he has seen during his journeys on six continents.