You are here: Home / Horror / A Lead Pill 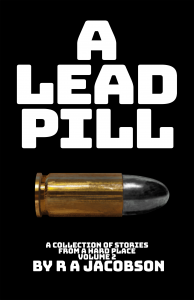 About A Lead Pill:

A Lead Pill is the second collection of short stories from a HARD PLACE.
Stories of loneliness and betrayal, of false hope and shattered dreams, of gifts and regrets, of love and accidental kindness. Each story follows separate paths that lead to the understanding that sometimes that only solution is a lead pill.
A life of stacked years never knowing that it was all in service to a memory in Service Up.
What do you do when life has outlived the reason to be alive in Tired of Living.
Finding love in the strangest places can lead to some strange results in Passing it Forward.
The desperate do desperate things that they soon come to regret in Haymaker.
She wanted the power, she just didn’t want to be used by it in The Refusal.
All your life you have wanted something but maybe you didn’t know what that was in The Touch.
His love of numbers led him to ask for something that turned out to be something else entirely in Adding it up.
.

Author Bio:
After leaving the north forests and farmland of Saskatchewan, Rick headed to Calgary and the Alberta College of Art. After 4 years of hard work, he came out confused and somewhat lost. Now what?

Rick has been a bouncer (1 week), he has been a radio switcher (1 night), he worked at the CBC (1 month), he was a stuntman (2 action movies that he never saw, but he’s not alone in that) and he modelled briefly (he was the Jolly Green Giant for a time). Rick has built houses, packed groceries, cut grass and has written four and illustrated nineteen children’s books. He has worked as a painter, a designer, an illustrator and a writer.
Rick has won awards for his work in advertising and publishing, including the Ruth Schwartz Award, the Amelia Frances Howard-Gibbon Award and numerous national and international awards including the Toronto Art Directors’ Awards, Communication Arts Magazine’s Award of Excellence, American Illustration Award of Excellence, and the New York Art Directors’ Award of Excellence. He has been featured in Smithsonian magazine, Applied Arts Magazine and in The Artist’s Magazine. His commissioned portraits include Robertson Davies, Margaret Atwood, Christopher Ondaatje, and David Thomson.