You are here: Home / Fiction / After the Devil 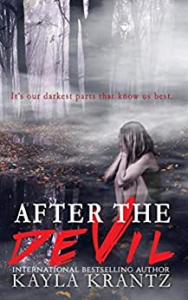 About After the Devil

It’s our darkest parts that know us best.

Alex Alpine is unhappy with her life—a dead-end job, a marriage that’s falling apart, and a failed string of self-published books. In an effort to better her life for her and her daughter, she makes the decision to quit writing in order to get a second job. Jamie, a recovered addict and Alex’s only fan, can’t bring himself to accept her decision.

Convinced he can fix her, he kidnaps her and holds her hostage in his home in the woods. As Alex’s captivity extends from weeks to months, Alex finds herself torn between her duties to the daughter she left behind and the life Jamie has made for her. To figure out where her true priorities lie, she must dive into not only her own past traumas but Jamie’s as well.

Kayla Krantz is an international bestselling author of dark fantasy, psychological horror, and supernatural thrillers. She is fascinated by the dark and macabre. Stephen King is her all-time inspiration, mixed in with some faint remnants of the works of Edgar Allen Poe. When she began writing, she started in horror, but somehow drifted into thriller and fantasy. She loves the 1988 movie, “Heathers.” Kayla was born and raised in Michigan, but traveled across the country to where she currently resides, in Texas.

To keep up with her, sign up for her newsletter: