You are here: Home / Mystery / Anathema 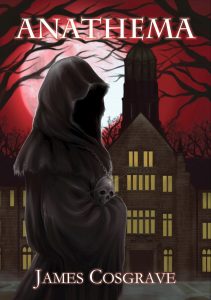 Murder, romance, and psychological suspense intertwine in this modern Gothic tale of a secret society at a prestigious university.

TRADITION IS A TRICKY THING TO KILL

Twice a year, Anathema emerges from the shadows to perform satirical Sermons—controversial events that lambast Radcliffe College and the behavior of its students. Membership in the organization is open knowledge, but its rituals are closely guarded by those involved.

When a dissenter to the group’s practices is found dead under mysterious circumstances, two of the secret society’s most dedicated members, Matt Richardson and Joan Keating, fear a killer is lurking within their ranks. But as romance blooms between them, the college begins to mistake their devotion to Anathema for dangerous fanaticism—and the pair soon find themselves under suspicion.

As they become tangled deeper in a nightmarish web of intrigue, deceit, and murder, Matt starts to fear what secrets Joan may hide. But the harder he falls for her, the less sure of her innocence he becomes…

Author Bio:
James Cosgrave grew up in New Mexico, but now lives in Vancouver, British Columbia with his fiancé and his dog. Anathema is his first novel.