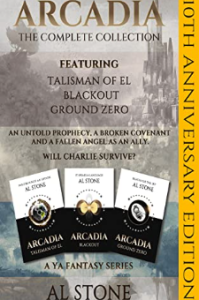 About Arcadia: The Complete Collection – 10th Anniversary Edition (A YA Fantasy Series)

AN UNTOLD PROPHECY, A BROKEN COVENANT AND A FALLEN ANGEL AS AN ALLY.

Arcadia, 10th Anniversary Edition is a complete collection, featuring three full-length novels in a single volume for the first time. A young-adult fantasy series full of magic, mythology and adventure. Perfect for fans of Harry Potter, Percy Jackson and Lord of the Rings.

Talisman Of El
They have always been here … watching in silence. Now both worlds are about to collide.

Charlie Blake has always known he was different. He hears what others don’t. He sees what others can’t. In his quest for the truth, he discovers he is the physical embodiment of a powerful ruler and finds himself locked in an ancient battle between good and evil that threatens the life of every being on Earth.

Saving mankind becomes near impossible when Charlie’s visions start to invade his reality. He can no longer identify what’s real. When he starts exhibiting symptoms of a deadly disease, he faces a race against time to find a cure, but shocking revelations makes him question where his true allegiance lies.

Ground Zero
Mankind’s only hope is not human. Approach with caution.

26,000 years ago, a supernatural apocalypse almost wiped out civilisation. Now that time has come again and no one is destined to survive. Charlie Blake is determined to stop the apocalypse, but fate might not have the same agenda. Is Charlie destined to save the world or destroy it?

Al Stone is the author of the Arcadia Saga (YA Fantasy). After graduating with a BA in Film & Television, Al worked in the television industry for a brief period before a disabling injury led to a pursuit in storytelling. Talisman Of El is Al’s debut novel. The sequels Blackout and Ground Zero are currently available for sale.