You are here: Home / Adult / Bait: Tales Dripping in Crimson 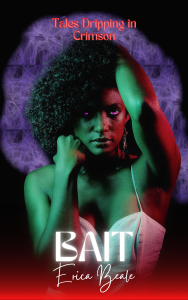 About Bait: Tales Dripping in Crimson

Welcome to Crimson, a posh, ocean-side city on the Eastern Shore of Maryland. But it’s not just a tourist trap; it’s home to all sorts of things that go bump in the night. Vampires, Skinwalkers, and Witches, among other creatures, roam the city streets, preying on the unwitting humans who have serviced them for generations.

Detective Mark “Kip” Kipper has only recently come to the knowledge of the supernatural world around him. On loan from the Crimson PD to the Department of Paranormal Affairs and Activities, he is assisting Special Agent Xander Sun in investigating a series of attacks made by a mysterious creature that uses lust to capture its prey.

There is only one way to lure this creature out into the open: offering bait she can’t resist.

…And there is one man who fits the bill.

Will Kip be able to resist the pull of a creature who feeds on desire, or will he succumb to the ecstasy she promises in poisoned honey whispers? Even a southern gentleman has his limits.

Smut Writer was supposed to be a joke!

By listing “smut writer” as a profession on Facebook many moons ago, a page was created in its honor. Despite not knowing what to do with the moniker, the likes began to mount. Not one to waste a gift, EB decided to attempt to take up the mantle.

Now she’s diving into the role. She’s always dabbled in erotica (particularly of the dark urban fantasy variety), but having more time on her hands than she’s used to, EB has decided to dive deeper into the hobby. More works to come.