You are here: Home / Horror / Dark Tales Of Sorrow And Despair 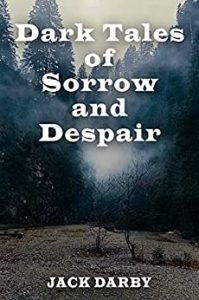 About Dark Tales Of Sorrow And Despair

The villagers stand huddled at the edge of the river, frozen by the sight before them.

Who would do such a thing?

The townspeople have become used to vagrants lurking in their streets since the fall of the Soviet Union, while witless officials shake their heads at mounting unsolved crimes. But the river sees everything. The drunks, and the abusers. The poachers and thieves. The children who walk into the twilight, and never return.

So many secrets trapped in its dark, icy depths, now all rising to the surface.
Up river, Sasha Karpov wrestles with the past; those times he’d rather forget, and the memories that leave his body flushed and sparking with excitement. He’s not a bad person, so he says, but his shameful secrets will go with him to the grave.
Unless of course, the river speaks for him.

Hi, my name is Jack Darby and I was born in Eastern Europe, in Dracula’s country, not far from his castle. There’s another world, believe me. A world full of mystery and inspiring events. I like traveling and writing. I worked in agriculture, construction, forestry and many other fields where I where I acquired lots of memories from, but also stories that can’t wait to be written. I am currently working as a teacher because opening an mind is the best thing anyone can do. I hope my stories don’t leave you indifferent.