You are here: Home / Fantasy / Daughter of Hades Collection By Dani Hoots 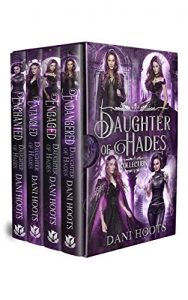 About Daughter of Hades Collection By Dani Hoots

Fall deep into the Underworld with this Amazon Best Selling YA Fantasy Series!

What would you do with the dichotomous power over life and death? For Chrys, apparently, it was to stay cooped up in the Underworld all her life. She wishes she could leave and see what the human world is all about, but her Father, Hades, would never allow it, as she was never supposed to be born. If Zeus found out, she would be sent straight to Tartarus. So she has stayed in Hades’ palace all her life, her only friends being a punk whom she convinced her father was a genius tutor, and a demigod who she may or may not have almost kissed (father would be so mad if he found out).

After a huge fight with her Mother, Persephone, Chrys decides she can’t take it anymore and has to travel to the human world, since her mother loves it so much more than her own husband. With her two best friends, Chrys travels through Oceanus and finds herself in London, England. Ready to experience what it was like to be human, Chrys decides they can stay for a couple of days before having to return.

Nothing could go wrong in that short of time, right?

Contains all four books of Daughter of Hades Series

Dani Hoots is a science fiction, fantasy, romance, and young adult author who loves anything with a story. She has a B.S. in Anthropology, a Masters of Urban and Environmental Planning, a Certificate in Novel Writing from Arizona State University, and a BS in Herbal Science from Bastyr University.

Her hobbies include reading, watching anime, cooking, studying different languages, wire walking, hula hoop, and working with plants. She is also an herbalist and sells her concoctions on FoxCraft Apothecary. She lives in Phoenix with her husband and visits Seattle often.