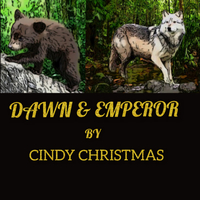 A story of Emperor, a hungry wolf in search of food, who came across Dawn, a bear cub all alone in the wild. For years wolves & bears been enemies, but Emperor who is not like his pack will put his life on the line to protect his friend and get him back to his sleuth.

Cindy Samantha Christmas (born 27 February 1985) is a Author, Illustrator & Poet. Cindy is mostly known for her poetry. Born Saint Michael, Barbados. Around January 1998, Cindy moved to the United States with her mother, who lived in Maryland. Cindy began to write at age thirteen as a way of expressing her feelings, because she was very shy.

At eighteen years old, Cindy decided to write a poem as a joke and send it to an online company, but to her surprise the company liked her poem and wanted her permission to publish her poem into their book.