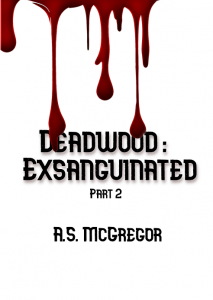 Something this wicked this way comes, and the inhabitants of the Deadwood mining camp discover that not all visitors are there to mine for gold. A centuries old evil has now set it’s sights on the mining camp, leaving Al Swearengen, Bullock and Sol Star at odds with one another as they struggle to understand their new enemy. An enemy, inhuman and hungry for the souls of each person it can consume.

A century earlier, Sol’s ancestor drew the attention of the Strigoi, evil creatures capable of manipulating minds as well as draining blood. The Strigoi are on a quest that will bring them from 18th century Prague to the Dakota Territories in 1877 where the camp struggles to understand why more and more people turn up dead, and what presence is now entering their dreams.

“The best tales are the ones that write themselves, born from the mind at play.”

Alistair Sinclair McGregor has been writing most of his life, the past 30 years spent writing software while his imagination germinated many tales that sprung from his upbringing in the mountains of New York. As a boy, mysteries mixed in with the history of the Mohawk River Valley and the Revolutionary war fired his imagination.

While traveling, A.S. McGregor has always asked the question “what would it be like to be here 200 years ago, a 1000 years ago?” Today he’s transcribing those images emblazed in his mind into exciting tales of adventure, horror, mystery, and speculation.