You are here: Home / Horror / Deadwood: Exsanguinated by A.S. McGregor 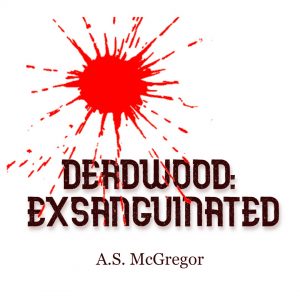 About Deadwood: Exsanguinated by A.S. McGregor

In Deadwood, they dug too deep in the mines. Evil forces are descending upon the Black Hills, and as Al Swearengen, Wu, Bullock, Sol Star and other members of the mining camp will find out, those entities are far deadlier than any fury unleashed by George Hearst. But as Deadwood fights to survive, a deeper mystery unfolds, and the mining camp will discover the conflict in which they are embroiled is the pinnacle of a centuries old quest begun in Central Europe.

Faced with these deadly challenges, Al and the Deadwood community struggle to understand what they are facing, and the old coalitions that helped them against Hearst may not be enough to overcome entities they cannot comprehend. One member of Deadwood may hold the key to this puzzle, but the fragments of heirlooms and family history may not be enough to thwart the new terrible threats.

Something is feeding on people, and as winter envelopes Deadwood, the mining community is trapped with a sinister, ancient malevolence that wants to drain the life of every soul it encounters.

“The best tales are the ones that write themselves, born from the mind at play.”

Alistair Sinclair McGregor has been writing most of his life, the past 30 years spent writing software while his imagination germinated many tales that sprung from his upbringing in the mountains of New York. As a boy, mysteries mixed in with the history of the Mohawk River Valley and the Revolutionary war fired his imagination.

While traveling, A.S McGregor has always asked the question “what would it be like to be here 200 years ago, a 1000 years ago?” Today he’s transcribing those images emblazed in his mind into exciting tales of adventure, horror, mystery, and speculation.