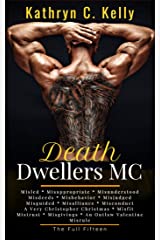 Discover the turbulent lives of the Death Dwellers’ motorcycle club officers in stories of older men and younger women, mmf menages, and interracial romances. Hardened, hot, and sexy, the bad boy bikers take no prisoners. Action and adventure. Brotherhood and family life. Crime, drama, romance, and humor, this box set has it all!

Outlaw had to f’n shoot or be f’n shot during what should’ve been an ordinary day at the Death Dwellers clubhouse. Yeah, he had a meeting with that hoof-foot mofo residing in hell, but he wasn’t ready to f’n dance with satan yet.
He chose to f’n live and, in doing so, changed the course of his f’n motorcycle club for-f****g-ever, setting off events that rocked the worlds of all his brothers. Mofos aligned with other mofos and against him. Plans of a coup were in the f’n works, and Outlaw prepared for battle. Then, Megan f’n Foy arrived and set off a chain of f’n events that brought mofos from the past that should’ve been deader than f’n dead. Time and a-f*****g-gain, mofos tested Outlaw. It wasn’t his fault mofos were f’n stupid cuz who in their right f’n mind tested the baddest of the bad boys. He had a f’n club filled with tough mofos and ride-or-f’n-die ol’ ladies. Outlaw warned his enemies to back the f**k off. They just didn’t f’n listen. He was challenged from all f’cn directions. But he didn’t give a good f**k cuz it wasn’t nothin’ but a thing.

In her dreams, Kathryn C. Kelly is a flirtatious biker babe with the rumble of a hog between her legs and a shirtless bad boy wrapped in her arms. Kathryn and her bad ass biker boy spend their evenings tossing back great scotch (Chivas Regal) and fighting over who is better at Cards against Humanity (she is, obviously.)

In her reality, Kathryn is a native New Orleanian who has survived Hurricane Katrina and breast cancer. Now she’s hoping to survive three lively girls. While not playing Wonder Mom, Kathryn can be found putting all those dreams into the pages of her next Death Dwellers Motorcycle Club novel.