You are here: Home / New Books / Dragon Keepers: Honor of the Tome by Bruce Goldwell 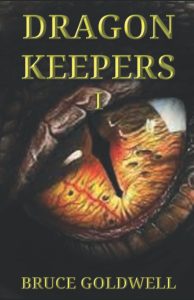 About Dragon Keepers: Honor of the Tome by Bruce Goldwell

Enter the world of Merlin the Magician from his early days to that as a white-haired wizard and the most powerful magician ever to exist.

The Dragon Keepers series is a fantasy adventure about Merlin the Magician. In book I, Merlin is turning 13 years old which allows him to become an official dragon keeper. Merlin ages through the book series to eventually become the white haired wizard we all recognize as Merlin the Magician. Everyone who loves dragon stories, fantasy creatures such as fairies, mermaids, elfs [elfins], etc. will enjoy the Dragon Keepers series.

Dragon Keepers I teaches one how to lose their worst fears. It starts off with a common 13 year old boy (Merlin) who very quickly begins to pick up a “massive amount” of responsibility and must learn many lessons to fulfill his role as a Dragon Keeper. As a Dragon Keeper, Merlin must teach his new dragon (Dracon) how to fly, live, and survive in the real world. He must also teach him the ways of his dragon ancestors. Read this story and see how Merlin naturally takes on his responsibilities, meets new friends, and battles with evil.

Bruce Goldwell was homeless for 10 years. During that time, he visited book stores to read self-help books written by leading motivational authors like Bob Proctor, Brian Tracy, and many others. As he read these books, he wished he had learned when he was young the success principles he was discovering for the first time. He wanted to be able to share these principles with young people so they would never end up homeless like him.

Goldwell envisioned writing a story where readers, young and old, could learn these principles through fantasy, mystery, and magic. Because books with dragons and Wizards were so popular, he decided to write a story with dragons along with fairies, Elfins, and other fairy-tell creatures. His main character would be Merlin and he would be 13 years old in the first book and age in each book of the series. As Merlin grew in learning and wisdom, Goldwell’s readers would learn with Merlin while taking part in this adventure story. Merlin would be a part of a secluded people whose main task was caring for dragons. He decided to to title his book, “Dragon Keepers.”

Bruce was offered a publishing contract by a small publisher in Canada which he accepted and thus Goldwell’s dream was on the way to becoming a reality. Book stores would not purchase Goldwell’s book since his publisher was not able to guarantee buying back unsold books being a small company of two people. Thanks to the internet, Bruce’s book could be made available to the world to buy online. Since the release of Dragon Keepers, both Ruth and Frank, his publishers, have passed away.

Bruce is continuing to offer Dragon Keepers as an independent author through the publishing services of Amazon. Because of Ruth and Frank’s belief in Bruce’s mission to help young readers learn success principles via the Dragon Keepers series, he is going to continue to offer his books online to honor the two people that believed in him and the mission of the books.

You are invited to come and join the adventure and even travel with Merlin to the world where dragons come from. Dragon Keepers is a story for Dragon lovers young and old.