You are here: Home / Action & Adventure / Facing the Storm by David DeLee 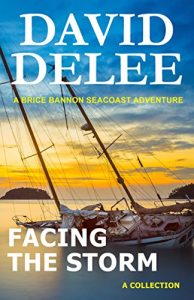 About Facing the Storm by David DeLee

Brice Bannon served fifteen years in the Coast Guard, most recently as captain of the Deployable Operations Group, (DOG), the Coast Guard’s version of the Army’s Special Forces and Navy’s Seals operations. When the command was decommissioned, rather than accept re-assignment, Bannon retired from the full-time Coast Guard. But Bannon didn’t leave the Coast Guard behind completely. He remains in the Reserves.

Recruited by the Secretary of Homeland Security, he leads a small, secretive team of specially-trained, highly-skilled operatives capable of responding to and investigating specific, targeted threats against the homeland. Threats that cannot be effectively handled by standard operating means. Threats that call for a unique and often secret approach outside the normal channels of either Homeland Security or the Department of Defense.

When not risking his life for the government, Bannon runs the Keel Haul, his bar in the resort town of Hampton Beach, on the New Hampshire seacoast. There, he also operates as a small town private investigator and tends to get himself in big trouble along with the help of his two best friends and teammates; Tarakesh “Blades” Sardana and CWO Skyjack McMurphy.

David DeLee is the author of the award-winning Grace deHaviland Bounty Hunter series, the Nick Lafferty thriller series, and the Flynn & Levy police procedurals, among others. Of David’s work, Grace deHaviland’s been called “original, interesting, and a fascinating point of view character” and SUSPENSE MAGAZINE called Crystal White “…a dark portrayal of the evil that men–and women–can do.”

David is a member of the Mystery Writers of America and International Thriller Writers. He holds a Master’s Degree in Criminal Justice and is a former licensed private investigator. A native New Yorker, David currently resides in New Hampshire.