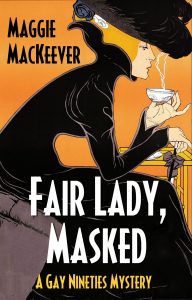 An actress in her time plays many parts. This may be Delia’s last.

Delia Ross has freed herself from society’s expectations. Luke Kelly has not. The emancipated actress and the disapproving police detective set out for Saratoga in pursuit of a fugitive jewel thief. Along the way they will encounter collusions and contrivances, diabolical double-dealings, a talented table-turner and a murderer and, maybe, a very irritated ghost.

Maggie MacKeever is the author of forty-plus novels, most of them set during England’s Regency era. She has been published by Fawcett Crest, Pocketbooks, Doubleday, Putnam, Zebra, and, most recently, Belgrave House/Regency Reads and Vintage Ink Press. Maggie lives in Los Angeles with two spoiled housecats, where she is at work on the next installment in her Gay Nineties Mystery series, set in 1890’s New York.