You are here: Home / Fantasy / Fate of the Fallen by Darren Lewis 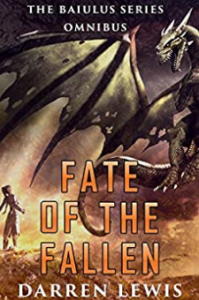 About Fate of the Fallen by Darren Lewis:

A darkness has woken in the village. Thrust onto the path of danger, Ellie faces a road where answers lie in wait. She alone must stand against the darkness that would consume all, and overcome it.To accept her fate may lose her everything. To stand against it may cost her everything.After Ellie receives a dire warning, she returns home with more questions than answers. She will discover her value not only to this new threat, but to a magical device created by the dragons. But their enemy has resources and power beyond reckoning, and will destroy anyone who dares to oppose them.

Author Bio:
Darren Lewis was born in Cardiff in 1975 and now lives with his family in Norfolk. Although an avid reader of many genres it wasn’t until his daughter, Ellie aged 6, asked for a story of her own that inspired him to put pen to paper.”Ellie and I would like to make up bedtime stories, mainly about a kangaroo that travelled the world and have adventures.”These bedtime stories would lead to a first book in the trilogy. ‘Ellie and the Rabbits’ in which our young heroine meets a group of talking rabbits.”My main goals were to induce a sense of wonder for my daughter, a sense of purpose and the importance of helping others.”A short book of poems for children followed and the sequel ‘Ellie and the Dragon’ was published in August and the trilogy was completed and published in December 2013 in ‘Ellie and the Battle.’The independent publishers Creativia added the books into their portfolio in early 2014 and published then as an omnibus edition entitled The Seren Trilogy.Ellie’s next series of adventures, set four years after the trilogy, are now available. A series of five books collectively known as The Baiulus Series. The five books deal with the ramifications of events in the previous books.Darren is currently writing the first book that will complete the overall story for Ellie, entitled Sisters of Ruin.When not writing Darren can be found walking the coastlines of Norfolk or painting and crafting with a particular fondness for steampunk, a subject he hopes to write about soon.