You are here: Home / Fiction / Fathom by Mikel Parry 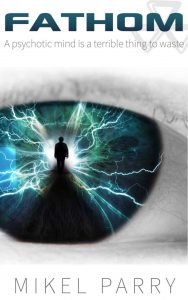 About Fathom by Mikel Parry

Demo Ward is different in his unique ability to solve cases by assimilating the criminal mindset using little to no evidence. A top-secret invention is revealed to Demo that will change his life forever…Fathom. Now he not only assumes the mindset of the criminal but enters it directly. His ability and dumb luck have carried him through years plagued with guilt after the devastating loss of his partner and best friend. However, now he finds himself tangled up in the case of the century as he faces his own demons. Decades of murder, lies, and deceit now come crashing into his world, and Demo is forced to solve an unbreakable case while using the warped mind of an elusive psychotic killer.

Fathom is excitement from beginning to end. Join Demo as he travels into dark caverns of the psychopathic human mind to stop the ongoing chaos unraveling around him in the real world. Within the realms of Fathom, anything the mind can create becomes a reality. It’s an impossible race against the clock that will push the limits of what your mind can fathom.

Mikel Parry is a creatively-addicted, prolific, author who’s been writing books for over ten years. While growing up in a small town in Southern Utah, he cultivated his imagination in hopes of one day writing the stories he so loved to create. He dreamed of far off worlds and outlandish ideas that entertained him during his upbringing. It took time, dedication, and a whole lot of work for him to finally decide that he was ready to bring his talent out into the open. As an author, Mikel Parry not only seeks to entertain, but to inspire his readers.

As an author Mikel Parry strives to fascinate, enthrall and twist your mind into creative gnarls. There’s nothing more rewarding to him than to hear that someone has enjoyed one of his stories. He spends countless hours plotting, creating and crafting each story in hopes of attaining the perfect recipe to captivate his readers. As a newly published author embarking on his dream of a lifetime, he hopes to be around for a long, long time. If you enjoy creative writing then you’ll enjoy Mikel Parry.