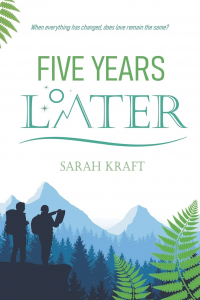 Elle Fox is a twenty-three-year-old dog mom living in a tiny house outside of Portland, Oregon. With a newly divorced mother next door who is starting over at fifty and a wealthy, narcissist father she hasn’t been able to look at since “the incident”, adulthood has become more chaotic than anticipated.

When an old friend invites her to join a group “zencation” to the Oregon Coast, Elle finds herself in the charming town of Newport in a picturesque mansion with her former high school peeps… and another man she can hardly stand to look at: her ex, Scott Darcy.

Five years ago, Scott had pulled Elle in like a rip tide. A rebel with a taste for adventure, he swept her away from small town life into the vast beauty of the outdoors. They had plans to see the world together… until he left her for someone else.

Told in dual timelines, FIVE YEARS LATER explores the trials of true love, the ties of a family divided, and the challenges of forgiving those who unintentionally hurt us- including ourselves.

Sarah Kraft was born and raised in Oregon. By day, she designs jewelry for Portland’s premiere brides. By night, she writes novels and designs for her fashion line, KoutureDeLeKraft.