You are here: Home / Horror / Going Dark by A. Kirk Straw 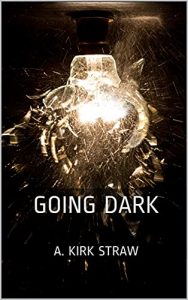 About Going Dark by A. Kirk Straw

When the founder of Dominatexs proposed the idea of selective euthanasia to control the surplus population to the Commissioner of Health, it was called inhumane and unnatural. The idea was dismissed from government consideration henceforth. However, the Vice President continued talks about the plan in secret, even after he was voted out of office. Three years later, every citizen has a microchip implanted in their bodies, and a child is at the controls.

Now, Craig Meyers, who has no idea about the microchips, must channel all of his experience as a firefighter to save the ones he loves from a disease he knows nothing about on a New Year’s Eve Day that started off as cold as the weather.

But is there enough time left to do what he needs to do before the ball drops?

A. Kirk Straw is an American horror author currently living in Camillus, NY. He spent his childhood in southern New Hampshire and his young adult life in Rhode Island. He has spent his entire life fascinated with what can and does scare people, and is always on the lookout for what can truly frighten him. Reading and writing has always been a passion of his since his early grade school days, and while he ventures to discover how to scare himself, he looks forward to scaring you.