You are here: Home / Featured Books / I am a hacker! Chronicle of the Lost Generation 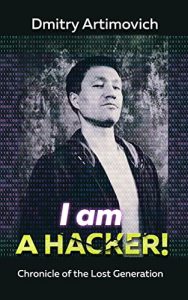 About I am a hacker! Chronicle of the Lost Generation

Western journalists keep talking about “horrible Russian Hackers”. According to the media, these hackers work for the Russian special services and the Kremlin and pose an extreme threat to world’s democracy – they control the U.S. presidential elections, paralyze the world’s largest companies and banks. Putin’s most terrifying weapon.

But who do the digital samurai and keyboard cowboys really serve? And the truth is that our government doesn’t care about hackers. It has forgotten them.

Read the story of Dmitry Artimovich, about how he became one of the most famous Russian hackers.

Dmitry Artimovich is an expert on payment systems. He headed one of the earliest Russian payment services, ChronoPay, and is known in Russia as one of the leading experts in electronic payment systems. In a series of interviews with the New York Times and other media, he was referred to as a Russian hacker. However, he prefers to be regarded as a computer technology expert.