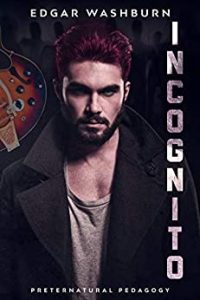 Sean Brannon, boarding school teacher, jazz guitarist, and beer enthusiast, wasn’t really Sean Brannon. The name was just one in a long list of aliases. He’d kept it for too long. The truth was that the name had become as comfortable as an old pair of jeans. He knew that he couldn’t stay forever, but he didn’t want to return to his other life. The choice was taken out of his hands, however, when his other life found him.

Sean Brannon was really Caomhnóir, the Talamaur-Moroi, and no other monsters would be allowed at his school.

Buy the book, and follow the author on social media:
Buy the Book On Amazon.
Visit the Facebook Fan Page.

Author Bio:
Edgar Washburn has loved comic books for as long as he could remember. Comics would lead him to interests in art, mythology, pulp fiction, and about a million and a half other things.

When he was twelve years old, a friend noticed The Sword of Shannara on his school desk and characterized the novel as “another Tolkien rip-off.” Ignoring the snarkiness of the comment, Edgar signed The Fellowship of the Ring out of the school library. By the end of Return of the King, he was addicted to fantasy.

He took up guitar playing in high school. Despite having no natural talent, he persisted. Thanks to friends who seemed to like having him around, he had the opportunity in college to play in a cover band called Thunder Chicken.

In college, he also found Sunglasses After Dark by Nancy Collins, which he would later consider his introduction to urban fantasy. The protagonist and the shadow world of pretenders evoked some of the darker comic books he enjoyed. The series would prime him for later UF authors whom he would like even more: Jim Butcher, Patricia Briggs, and Charlaine Harris to name a few.

In 1992, he was also introduced to the fledgling craft-beer scene. It began with a promotional Samuel Adams Boston Lager at his local bar. Since then, he has tried to sample every style from every brewery. Only the number on the scale holds him back.

He discovered hardboiled detective fiction after college. Dashiell Hammett, Raymond Chandler, Ross MacDonald, and John D. MacDonald started him off. This, in turn, inspired an interest in classic Hollywood. Thanks to TCM, he developed a pretty broad knowledge of the area.

He taught middle and high school English for the better part of twenty years, mostly at a private boarding school in New Hampshire. There, all sorts of crazy ideas went through his mind. Some of those ideas made their way into his writing. It was at this school where he would meet the love of his life, the history teacher across the hall.

In 2017, Edgar and his wife moved to Oregon where he would drink lots of beer and write a book.