You are here: Home / Featured Books / JC’s Cure For Cancer by Mike Scantlebury 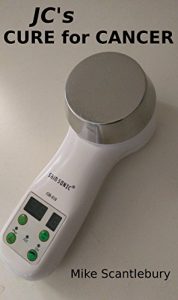 About JC’s Cure For Cancer by Mike Scantlebury:

Jeremy Ceremony is a normal sort of young man. He wants to do well and he wants to earn a living. Why not? He thinks he’s found the cure for cancer. Surely someone is going to give him some cash along the way?
Amelia Hartliss meanwhile, Secret Agent, has been given a routine mission, to go undercover and find a new arrival in Britain, someone who might have been sent here with murder in mind. Her investigations take her to an unlikely destination – a suburban church, providing support and beds for the Homeless. While there she is told about a regular member of the church congregation, a man called Jeremy. She is shocked to hear he might be able to cure cancer. It would be so useful!
Jeremy’s boss has the disease. Melia’s lover’s father had been taken ill. The Vicar at the church too. They are all suffering. They all need treatment – fast. And then, the greatest surprise. Melia’s oldest adversary, her nemesis, arrives in Manchester. To kill her? No, to say goodbye. He too is afflicted. His time is limited. He is trying to make amends, he says, but dare she trust him, after everything that has happened between them?
Melia finds herself conflicted, her emotions ravaged by people she used to think of as friends – they’re not – and people she used to think of as enemies – they’ve changed. If only her boyfriend Mickey was there, but he is abroad, on a secret mission. No, Melia is going to have to tackle this pressure alone, finding support where she can, but drawing on her own inner resources. After all, they call her ‘Heartless’. Surely she is tough enough to cope!

Author Bio:
What can you say about Mike Scantlebury –
that isn’t taught in schools already?
Well, he says he was born in absentia (the small town on the Bay of Biscay), beside the dock of the bay, but moved to England when young, and not yet able to navigate astutely. His family settled in the West Country of England, near a cross culture called Temp Chelney, where his father became a map maker and mushroom farmer.
When the borders were changed in the 1980s, Mike packed a service record and moved to an apartment in the nearby city of Bristol. This is where he first got involved in folking, flaking and faking. Later, he became disenchanted.

You can find Mike Scantlebury on the internet.