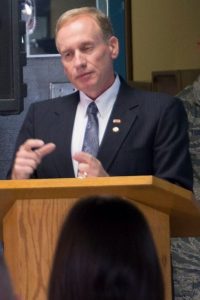 Tell us about yourself and how many books you have written.
Well, I grew up on the North Shore about 15 miles outside of Boston. I’m a huge Sox, Pats, Celts and Bruins fan…you’ll always catch sports references in my books. I received a lot of feedback from readers and how they loved the local [New England] descriptions and scenes in Solemnly Swear. Deliberate Deception takes place in Tucson, so we’ll see how that works out. They say to write what you know, so there’s plenty of New England references and now Tucson in Southern Arizona. I served 25 years on active duty all over the world, and I taught Air Force ROTC at the University of New Hampshire, so I won’t be running out of material anytime soon [chuckles]. So I currently have the two novels and I’m working on number three.

What is the name of your latest book and what inspired it?
So Deliberate Deception is the sequel to Solemnly Swear in the Alex Porter trilogy. My readers love Alex, especially female readers…or so the email I receive tells me.

My goal is to keep readers guessing and involved in the story. I haven’t heard from one person who said they had guessed the ending of Solemnly Swear. I love plot twists. There are a few surprises in Deliberate Deception that hopefully the reader won’t see coming. I also use storylines straight out of the news to keep my fiction real.

For instance, I didn’t plan on including the 2011 Tucson tragedy in my book. I started Deliberate Deception before the shooting happened. I was halfway through the plot when the story broke. I have a small TV on my desk and I monitored the story as I worked on the book. It was a few days later, when they announced President Obama was coming to Tucson, that it clicked and enhanced the plot. I remember thinking, we just had a politician shot in the streets of Tucson; they weren’t sure if it was politically motivated or if the shooter was a nut job… and they’re going to bring the president here for the memorial service? Still, it caused a lot of consternation for me. It was still too new, too fresh, too soon to write about the senseless tragedy. Almost eight years have passed now, I’m hoping that’s enough time to be able to use it in a fictional story.

So, I write about what’s around me. In the book’s promotion I use the description: “A greedy corporation rigs a multi-million dollar raffle…what comes next will shock the world!” That’s based on a few large raffles we have here in Tucson and Phoenix. I also use my knowledge and experience to infiltrate the local Air Force Base, travel to Key West and Trinidad in the Caribbean…all places I’ve been to for different reasons. But allow me to read a line from the book: “References to real people, events, establishments, organizations, or locales are intended only to provide a sense of authenticity, and are used fictitiously.” Sorry…couldn’t resist.

One of the book critics of Solemnly Swear gave an awesome review, but mentioned that my compositional style would have kept his attention at twice the page count (it was 252 pages). Be careful what you ask for…Deliberate Deception has 416 pages in the print copy that is due out soon…the current eBook has 408 pages.

Do you have any unusual writing habits?
Yes, I have a career with the Department of the Air Force so I write whenever I can…usually early in the morning or evenings; definitely on the weekends. But I love the writing and the time slots work. It’s the editing, publishing and marketing that is the tough part and time drain.

What authors, or books have influenced you?
I was a big Hardy Boys fan, and I read a lot of Don Pendleton’s Mack Bolan books: The Executioner. In my teens, I mainly read King, Grisham, Ludlum and then moved on to Hunter, Connelly, Baldacci and Flynn. But the novel that had the most impact on me as a teen was Stephen King’s The Stand. It wasn’t until John Grisham’s The Summons that made me want to put words to paper. I believe that was the summer of 2002.

What are you working on now?
I’m working on a novella with my daughter, Lily Mingus, called the Ghostwriter’s Wife. She was always into ghosts while growing up. I’ve also started the final Alex Porter novel, Revenge Resurrected, which I hope to have out sometime next year.

What is your best method or website when it comes to promoting your books?
You mean websites…you have to be on a whole truckload of them. The options were limited when I released Solemnly Swear in 2007. Today, being an Indie and social network is amazing.

Do you have any advice for new authors?
Yes, get dedicated. The competition is rough, the work is hard, and you’re not gonna get rich. Do it for the love of the pen. But seriously, edit, edit, edit. I’m a true believer in subcontracting for developmental editing (I learned that from The Editorial Department in Tucson). Then follow that up with a line or copy edit (or both) and a professional proofread.

What is the best advice you have ever heard?
Don’t give up your day job. I never heard that actually…I think I said that to myself.

What are you reading now?
I’m behind in my reading…and I have a stack of books on my desk by the authors that inspire me the most: Stephen King, David Baldacci, John Grisham, Vince Flynn, Kyle Mills, Stephen Hunter, Linwood Barclay and Harlan Coben. I’ll let you know when I finish them.

What’s next for you as a writer?
I try to grow as a writer on each project. I learn from my feedback, book reviews and talking to other authors and editors. I believe that has paid off for Deliberate Deception…regardless of what happens, I’m really proud of my efforts and the finished product. But I’ll finish the Alex Porter trilogy (unless there are chants for more)…and then try my hand in other genres.

What is your favorite book of all time?
I’ll go with Stephen Kings, The Stand…but his other book, 11-22-63, is a very close second.