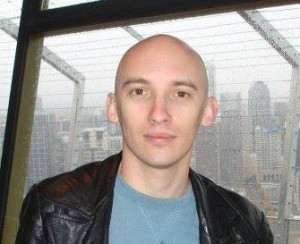 Tell us about yourself and how many books you have written.
I’m a Science Fiction and Fantasy author. I currently have three series in print: The Renegades space opera and space exploration series, the Shadow Space Chronicles military science fiction and space opera series, and the Eoriel Saga epic fantasy series.

I am a US Army veteran who has been deployed to Iraq and Afghanistan. I live in Colorado and I’m married to my wonderful wife (who deserves mention for her patience with my writing) and I share my home with my infant son, feline overlords, and a rather put-upon dog. I like hiking, skiing, and enjoying the outdoors, when I’m not hunched over a keyboard writing my next novel.

What is the name of your latest book and what inspired it?
My latest book is Echo of the High Kings, an epic fantasy novel that starts the Eoriel Saga. I was inspired originally to write it by the classics of the fantasy genre, but I kept stalling every time I tried to write it because it didn’t feel like I had anything original to say.

What changed that for me was my increasing dissatisfaction with the current variety, or lack thereof, that I see in the epic fantasy genre. There seems to be a stock of characters, settings, and people that authors check off, like going down a shopping list. I found it increasingly frustrating in that I knew how the books would end, what would happen to character, or even how it would occur, often from reading the back cover. On the other end of the spectrum are books where the reader has no idea what will happen, but in these books, oftentimes it is hard to relate or care about the characters, especially given their survival time might be measured in paragraphs.

For Echo of the High Kings I spent over a decade in world-building, tying that into the characterization and plot so that characters are products of the world in which they live. This world is such that magic doesn’t allow fixes any more or less than the intelligence which guides it, heroes and villains alike are motivated by complex histories, personal tragedies, and goals that are important to them as well as the reader.

Do you have any unusual writing habits?
My most unusual reading habit is the speed at which I can write, once I’ve thought everything through. I wrote Echo of the High Kings in just under a month, writing 6000 to 12000 words a day. When I’m really settled into writing, I’ll have background music playing and I’ll write until I run out of time, often because I’ve got work or (increasingly) that my son needs attention. I’ve written entire novels in under a week, though my current best wordcount in one day was a 36,000 word novella written on my flight home from overseas.

What authors, or books have influenced you?
I’m a voracious reader, often tearing through a full length novel in three to four hours. That said, I read primarily science fiction and fantasy, when I read fiction. My big influences have been Robert Heinlein, David Weber, Andre Norton, Anne McCaffery, and of course Tolkien, to name a few.

What are you working on now?
I’m currently working on the sequel to Echo of the High Kings, the second book of the Eoriel Saga, which is Wrath of the Usurper. My writing of it has been interrupted quite a bit over the past couple months, though I’m really enjoying developing further the characters and stories told in the first book. After this, I move back to writing military science fiction with The Prodigal Emperor, which is the third book of my military SF series.

What is your best method or website when it comes to promoting your books?
I rely heavily on my blog and I see a lot of traffic there. I also attend a number of fandom conventions where I’ve seen some success speaking on panels and talking to people in person. I’m branching out a bit now trying out promotional websites such as this, mostly because I’m a cross-genre author and many of my fans from my better selling science fiction series either don’t read fantasy or don’t realize that I write that as well.

Do you have any advice for new authors?
My main advice for new authors is to be certain you put forward the best product you can. The book you’ve finally finished is probably not ready for sale, not unless you’ve run it past a few people and done some serious editing. Once you’ve done that, get it published and promote it and then get right back to writing the next one.

What is the best advice you have ever heard?
The best writing advice I ever heard was that the first million words you write is garbage. When I look back at how my writing has improved, I have issues even reading a lot of my older stuff, much less editing it and trying to see if I could make it something worth putting out there.

What are you reading now?
I just finished reading the e-ARC of Ryk Spoor’s Phoenix in Shadow, an epic fantasy novel with a lot of interesting twists and turns. I really enjoy that series because he takes the typical fantasy setting and turns it a bit askew. If a reader goes into it with standard preconceptions they’re likely to be very surprised.

What’s next for you as a writer?
As I said before, my next project is a military science fiction novel, The Prodigal Emperor. It’s the third book in my Shadow Space Chronicles series and I can’t wait to dive into it and really get writing. The series has by far been my most successful and the reader responses I get really fire me up and make me want to dive into it.

What is your favorite book of all time?
My favorite book of all time… gosh that’s a hard call. I’ll have to go back to the classics and say Robert Heinlein’s The Moon is a Harsh Mistress. It’s a book with a lot of layers and huge depth as far as social themes, messages, and concepts of right and wrong. It’s also written in ‘lingo’ throughout, which for anyone who has tried to write like that… well, it can be almost overpowering.