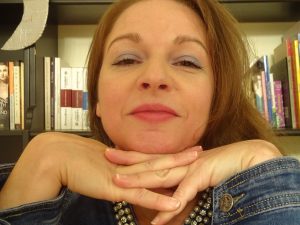 Tell us about yourself and how many books you have written.
Well, I have had two books published, a novel and a short stories collection, in my native tongue, which is Greek, and now I am about to launch my debut novel in English. I think it was about time really, because what I usually write about has nothing to do with Greece or Greek history, so right now I feel kind of like being where I'm supposed to be.

What is the name of your latest book and what inspired it?
It is a historical romance, a WW2 romance set in occupied Paris, and it's called "WINTER PALE".
It's a story I've pretty much grown up with, slowly forming in my head since my twenties, but it has actually matured in the last few years, now being at the point where it's as good as it gets. I think it was a Greek WW2 movie from the '70s that inspired it – I must have been in my teens when I first saw it, and it was strange, unexpected and surprising, because what touched and inspired me the most, was not the tragic couple's drama, but another, one that got me quite a bit of rebuke, too, to be honest. But I can't say any more because then I'll be giving away too many spoilers from my book, haha!

Do you have any unusual writing habits?
Unusual? I don't know! I like to have an image for the main characters of my story in my head; it helps me shape them, determine their background and how they will act in the story. I get very inspired by books and movies. When I decide what it is that I want to write about, I read and watch practically everything there is about the era and the historical context. I particularly like digging up personal accounts from people who lived then, but, of course, it helps because I write about the 20th century, there are now plenty of resources to get what you need. I usually do this before, but also during writing. It helps me create a world around my story and I think that gives my stories some reality, which is important, especially if you are writing historical fiction. But this research stage is really my thing, I just love doing it, I feel so illuminated at times. It's amazing how your whole perspective on something may change because of a minor detail you found out in all this informational excavation.

What authors, or books have influenced you?
I carry in me a little bit of every book I've read since childhood. I don't think I ever got over Margaret Mitchell's "Gone with the wind", which I first read translated in Greek at the age of thirteen/fourteen. Much later, while I was studying English Literature, I was shocked, somewhat violently awoken by "To room nineteen" by Doris Lessing. Growing up in a traditional Greek family, it is easy to lose focus on your own needs and desires, because social roles weigh too much on what you are supposed to do with your life, especially if you are a girl, and that read was like a slap in the face for me. I've been greatly influenced by the psychographic Dostoevski works and I very much enjoy books with complicated characters who suffer looking for their own, but also man's in general, existential meaning. Hermann Hesse is very good at that, Camus, Kafka. Of the more recent authors, Jean-Claude Izzo also has this "I'm looking for something, but I don't know what it is" tormenting theme in his stories, where social circumstance pushes his characters to the margins, but it's in a very sweet, very human way, intriguing, too, because there is a crime-solving situation that kicks the story off, and all in a very vivid, nostalgic Marseille set. Graham Swift, Jack Kerouac. So many more… Toni Morrison- her "Beloved" was so haunting and so heart-breaking…

What are you working on now?
I've already set the basis for my next novel "Simone's passion". It comes from a very dramatic story within the story of "Winter Pale", a sort of prequel to it really, although "Winter Pale" was not originally created to be part of a series. Working on Winter Pale gave birth to this imperative need to explore this story much deeper, and this is where I'm going at the moment. Of course, there isn't really much time for writing these days, preparing for the launch of "Winter Pale", but the story is simmering in my head, and there will be plenty to work with once I do get the time to sit down and start writing again.

What is your best method or website when it comes to promoting your books?
I'm afraid I'm still in a try-fail phase, hoping to find what works. I do a lot of online research, Alexa Bigwarfe's newsletter has given me great insight, Kindlepreneur, Philip Duncan, I listen, pick up ideas, try to find out what's best for me. I've listed my book on almost all platforms there are for advance readers, I do what I can on social media, and I have recently signed an agreement with OnlineBookPublicity.com and Hajni Blasko for an after-launch digital campaign. I'm currently thinking of exploring those book tours often advertised, I'm not sure what they do or if they work. I am planning to do some Amazon, Facebook and/or Google ads when I'm close to publication and thereafter, even though my budget runs on an ever-getting shorter shoestring, but I feel I just have to try different things and, hopefully, a couple of them will bring some result.

Do you have any advice for new authors?
Yes. Don't give up! It's chaotic and very competitive out there, but if so many authors have made it, why not us? You just have to be honest with yourself, strict with your work, write and rewrite it, remove what doesn't help the story go forward, even if it is your favourite part. Realising what the end of my book had to be, I cried for days, but I am now more certain than ever that it wouldn't have worked out any other way.

What are you reading now?
I'm sorry to say that, at the moment, I only read articles and posts related to book marketing! I have "Like a Sparrow Through the Heart" on my GR bookshelf, it was a very clever and intriguing title so I picked it, but I have hardly had the chance to start reading it (sorry Aggy Bird). I thought I would have time for some reading during the holidays, but, for an indie author, there is sooo much to do, much that a writer may not be familiar with, and that's both time- and energy-consuming. Imagine it took me two weeks to complete my paperbound setup on IngramSpark!! So, I'm stepping back from being a reader and a writer for now, and letting the businesswoman take over (not for too long, I hope!)

What’s next for you as a writer?
I'd like to see where this first book is going and immediately start writing my next one. Like all writers, I do hope to be able to live out of my books some day. I am very envious (always in a good way) of people who have managed to make a living out of their dream. It isn't easy. But I'll try.

What is your favorite book of all time?
Oh, I couldn't possibly have all those stories, characters and authors fighting in my head over the winner's title! Besides, I believe our favourites change with time, every now and then a new book coming to displace its predecessor. I'd answer this question with the last great book I read, and it was Douglas Stuart's "Shuggie Bain".