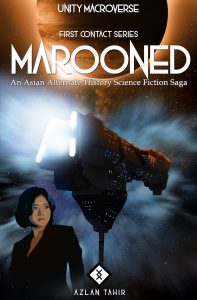 What if the Chinese Treasure Fleet continued on..?
What if Colonialism was ‘kept in check’?
What if Social Communalism becomes the predominant belief system on a different Earth?
What if the United Nations was run and supported by Asian Powers?

Nearly a thousand years after the Chinese Treasure Fleet first sailed across the globe, continuing to spread Asian culture and influence through trade instead of conquest – a new seed of conflict is discovered on the Jupiter moon of Ganymede.

An unprovoked attack on a mining facility jointly developed through an uneasy alliance between the United Nations of Earth (UNE) and the Mars Administrative Corporation (MAC), raises suspicions from both factions.

Has the clash of ideologies between Asian-influenced Earth and Western-driven Mars reached a tipping point? In an attempt to diffuse the situation while identifying the attackers and their motives, Captain Olivia Chu and her crew of the UNE Starship Tigris, accompanied by an attachment of the elite Malayan Rangers, sneak their way through Martian defenses to investigate.

What they discover, is something different entirely, having a bearing over the evolution and continued survival of humanity as a whole. Only that they have not come to realize it… yet.

“Marooned” is the first book in the “First Contact” story arc from the Unity Macroverse. Explore key characters as well as numerous locations across the Solar System including sprawling independent settlements throughout the asteroid belt.

As the future hangs in limbo, differences must firstly be set aside – as unity is ultimately paramount.

Azlan Tahir and Adely Ariffin are co-founders of a Malaysian Science Fiction Community which is called The Unity Macroverse. It is a Malaysian Community of Sci-Fi story contributors from members through a large canvas ,created with the intention of inviting and engaging like-minded individuals, groups, organizations, etc., to participate and contribute to a world-building experience. The premise was created within the genre of Science- Fiction with the intention of encouraging interest in this area.