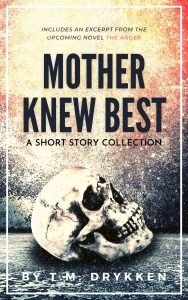 For millennia, mothers have adopted a language all of their own, often misunderstood by their parental counterparts, but translations made clear and direct to their wide-eyed urchins. They have a way of making their points with alarming precision, simple sentence shockers. From the threatening to the sarcastic to the logical, our mothers have created an idiom compendium rivaling those from Oxford or the ancient scholars of biblical times.

This unsettling collection shares but a few of these phrases along with the inherent consequences of not taking them to heart as children and passing them off as just “things mama said.” When the figurative becomes reality, the nightmares become alive and the illogical reigns. From a pestering angel to an ill-tempered businessman to an unrelenting and injurious storm, one would be wise to listen with eyes, ears, and mind wide open to what is occurring…because more often than not…mother knew best.

Stories Included:
ANGEL ON MY BACK
PICKING UP A BAD CENT
THE MUDDLING
HISS AND SPLATTER
RUMP ROAST
MAINTENANCE MAN
GLACIAL FEATURES

T.M. Drykken has been writing fiction in the horror genre for over fifteen years. He has been published in multiple e-zines, magazines, and chapbooks, and is currently working on his new novel, The Anger. Mr. Drykken invites you to join him in that dark place where we all eventually end up- that place in which you both despair and find comfort-that place you are home.