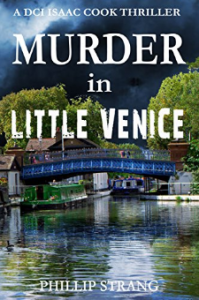 A dismembered corpse floats in a canal in London. Isaac Cook is baffled as to why it’s there. Is it gang-related, or is it something more?

Whatever the reason, it’s clearly a warning, and Isaac and his team are sure it’s not the last body that they’ll have to deal with.

Phillip Strang, an avid reader since childhood, was born in the late forties in England.

In his early twenties, the author, with a degree in electronics engineering, left England for Sydney, Australia.

Now, nearly fifty years later, he still resides in Australia, although many intervening years spent in a myriad of countries, some calm and safe – others, no more than war zones.

The author of thirty-one books, the majority of them crime thrillers based in the United Kingdom, he has also written several books on terrorism and one on a pandemic.