You are here: Home / Featured Books / Neither King Nor Country 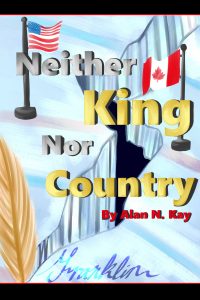 About Neither King Nor Country

It’s the greatest secret in American History.
So powerful it could topple Mount Rushmore itself.
And someone has found it!

Rob Callahan was a man who wore many hats; Father, teacher, hockey player, husband and friend. He lived his life in a delicate balance and he lived it to the fullest.
His teammate Lindsey loved being just one of the guys. She had played hockey all her life and never let anyone stop her from following her passion.

“I have recently gathered in my possession, various documents and letters from my father concerning our Treaty with the British…”

Rob and Lindsey had no idea what those words meant or what they had to do with Benjamin Franklin and his bastard son but they knew it was something terribly important.

So despised he was erased from history…

There was no time for any of this. Rob’s marriage was falling apart, his boys were taking different sides in a family civil war and the only thing keeping him sane- his beer league hockey team was about to fall apart if he and Lindsey made the wrong move.

It was a secret that could tear America apart, perhaps buried by the Founding Fathers themselves.

But where did their loyalties lie? Should they honor Rob’s grandmother and follow this crazy historical trail? Should they just ignore the secrets and each other to keep Rob’s family together? Or should they follow their heart, their passion and just let the chips fall where they may? How could they resist? How could they ignore one of the greatest secrets in America, a secret buried for more than two hundred years?

Alan N. Kay is an award-winning teacher and author with more than 25 years of experience bringing stories to life. Known for creative teaching as well as creative writing, Kay has won multiple awards.

Alan N. Kay is also the author of Neither King Nor Country a historical mystery/thriller novel set taking place in both the present as well as the American Revolution. His writing career began with his Young Heroes of History set of novels: a historical fiction series for children. Based during the Civil War, this series tells the story of one entire family split into North and South and traces both sides through its eight volume journey. Complete with detailed lesson plans, this series is perfect for entertainment as well as learning. In addition he has also written a non-fiction book titled “I Love History but I Hated it in School” as well as numerous articles for various publications over the years. He will always be the most proud however, of his three beautiful adult children who are all finding their own paths to success.