You are here: Home / Horror / Nurse Alissa vs. the Zombies VIII: New Beginnings 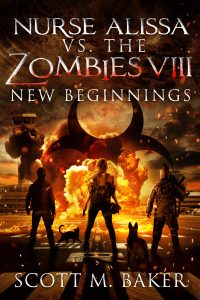 About Nurse Alissa vs. the Zombies VIII: New Beginnings

The future of humanity is still uncertain.

Alissa and her team have finally found a haven where they can live safely, but for how long? Every day in this new and dangerous world presents different challenges that only the strong and cunning can survive.

Despite their overwhelming numbers, the deaders are not the worst enemy Alissa faces. Slade refuses to accept his earlier defeat and launches an operation that, if successful, will make him the ruler of the new America.

Armed with their experience and amazing war machines, Alissa and her team are ready to face both adversaries, living and living dead. Will their experience give them enough of an advantage to survive and fight another day?

Scott M. Baker was born and raised in Everett, Massachusetts and spent twenty-three years in northern Virginia working for the Central Intelligence Agency. He has traveled extensively through Europe, Asia, and the Middle East, many of the locations and cultures becoming incorporated in his stories. Scott is now retired and lives outside of Concord, New Hampshire, with his wife, his stepdaughter, and two cats who treat him as their human servant.

Scott is currently writing the Nurse Alissa vs. the Zombies and The Chronicles of Paul sagas, his latest zombie apocalypse series, as well as his paranormal series. Previous works include Operation Majestic, his first science fiction novel described as Raiders of the Lost Ark meets Back to the Future – with aliens; Frozen World, his first non-zombie post-apocalypse novel; the Shattered World series, his five-book young adult post-apocalypse thriller; The Vampire Hunters trilogy, about humans fighting the undead in Washington D.C.; Yeitso, his homage to the giant monster movies of the 1950s that he loved watching as a kid; as well as several zombie-themed novellas and anthologies.