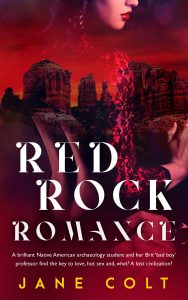 Cocheta ‘Cat’ White Eagle is a Native American archaeology grad student on a mission to prove the existence of her ancestral Lost Tribe. A vision tells her it’s somewhere high in the treacherous mountains of Sedona. The only problem is she’s afraid of heights! Trying to conquer her fear through pole dancing—of course—she attracts the attention of a bad boy Brit. He’s exciting, brilliant and sexy but totally off-limits. He’s her new professor, a hound, and if he recognizes her as the girl behind the mask of ‘The Contessa’, her career will be over before it begins.

Colin Tucker is a drop-dead-gorgeous Londoner who is rocketing to the top of his field. Alas, the sandy-haired, blue-eyed wunderkind has a weakness for sexy women—including the French Ambassador’s daughter, no less. Banished to the Colonies, he finds himself torn between the exotic stripper and his brilliant student. After being put to a sexy test, he gives his heart to Cat, his student. He pledges to help her in her search, they join forces and live hap—

But wait! Smugglers, deception and danger… Oh my! Colin breaks up with Cat to keep her safe, gets arrested for stealing artifacts and helps the thieves trying to thwart her quest.

Is that really how to win the girl?

Jane Colt began writing romances to deal with the stress of a ‘day job’ that’s mainly about examining the various ways people treat one another badly. An incurable romantic, her stories give her hope that we really can live happily ever after—even if only in our imaginations. She writes erotic romances because, having been raised in a morally rigid home, she wants to encourage in her readers a healthier, ‘sex positive’ outlook. She especially wants her heroines to be as sexy and passionate as they desire. You can count on the fact that her couples end up in love and having great sex! … OK, maybe they have the sex first!

Her stories aim to be light-hearted, fun, upbeat—and sexy! No dark, brooding, broken, tortured guys who need fixing. Just great, handsome, smart, sexy, ‘real men’ whose only weakness is being unable to resist the women she pairs them with. Think Lifetime or Hallmark movies plus hot sex!

She’s lived on both coasts of the U.S., recently leaving the beaches of Los Angeles to return home to the glorious autumn foliage of western Massachusetts. Married, she and her spouse are happy to be the devoted servants of two adorable cats. She loves traveling. Favorite cities: San Francisco, Boston, Venice, London, London, London!