You are here: Home / New Books / Sandbox by Sean Henderson 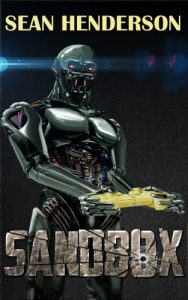 About Sandbox by Sean Henderson

When two menacing dark-suited men turn up looking for them, Daniel and his best friend Cameron know they’re in deep trouble. Their illicit online activities have finally caught up with them – although it was how their team played a computer game that got them watched by scientists working for the military.
The choice is between going to jail or joining other ultra-competitive teenagers in a top secret project to pilot and develop combat droids.
It might seem an easy decision, but Daniel and his friends are going to find they’re the only thing standing in the way when all hell breaks loose.