You are here: Home / Fiction / Sea Wolves: Early Viking Raids on the Kingdom of Kent (The Sceapig Chronicles Book 2) 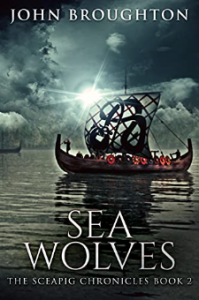 About Sea Wolves: Early Viking Raids on the Kingdom of Kent (The Sceapig Chronicles Book 2)

In the early 9th century, Asculf leads a quiet life among his apple orchards on the Isle of Sceapig. When called upon for military service, he covers himself in glory.

His prowess leads to a friendship with King Aethelwulf of Kent, who offers him one of the most prestigious positions in the kingdom. Meeting King Egbert of Wessex through his son, Aethelwulf, his courage and successful grasp of strategy promise them great success.

Realizing the potential of naval power, he comes up with a plan to defeat the invading Norsemen and save the Kingdom of Kent. But when hundreds of Viking longships attack the English coast, can father and son save Kent from devastation, and at what cost?