You are here: Home / New Books / Spies Like Me 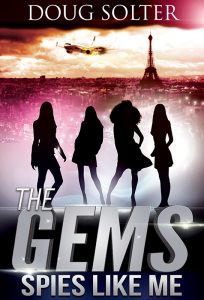 When she discovers her father’s plane crash wasn’t an accident, sixteen-year-old Emma wants to punish those responsible. Even if it means becoming a spy for a mysterious organization known as The Authority.

They want Emma to join the Gems…four young women who know how to handle themselves in dangerous situations. Like sneaking into a mountain stronghold to stop terrorists from incinerating the world’s food supply.

The Authority thinks Emma is the missing link to make this team work.

Emma thinks The Authority is her only chance for revenge.

Spies Like Me is the first book in The Gems Young Adult spy series that features fast-paced action, crazy thrills, girl-power bonding, International intrigue, and a touch of romance.

If you like culturally-diverse characters, fun dialogue, cool spy gadgets, and a romance with a complex boy to figure out, then the first book in Doug Solter’s exciting new spy series is for you.

For ages 13 through Adult.

Doug Solter began writing screenplays in 1998, then made the switch to writing young adult fiction in 2008. His first novel SKID was a screenplay before it was adapted into a book. Doug has worked in television for over twenty years. He has directed rap music videos and short films. Doug respects cats, loves the mountains, and one time walked the streets of Barcelona with a smile. Doug is an active member of the Society of Children’s Book Writers and Illustrators.