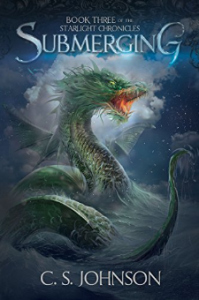 A drastic change of heart. A determined choice to commit. An unexpected betrayal at a critical moment. There is nothing like a birthday to give Hamilton Dinger something to look forward to in his busy life. With his new job as a part-time intern at the Mayor’s office, being a full-time high school student and starlight warrior has its challenges. And although he has the full support of his girlfriend, Gwen, and his best friend, Mikey, and even a tentative partnership with Starry Knight, his ally against the Seven Deadly Sinisters, Hamilton has definite cause for concern.The arrival of SWORD, the growing demonic activity in Apollo City, and the increasingly negative media attention has sparked ongoing unrest among the city and its inhabitants. To gain more power, Elysian and Hamilton set off for the Celestial Kingdom to deepen his commitment through learning, new landscapes, and cosmic surfing, evil forces continue in their quest for power and control. But when Hamilton finds uncertainty and distrust between his two worlds, will he be able to find the answers to his questions? Will he find the strength he needs to carry on? Will he realize the importance of his choices, and more importantly–make the right ones?FROM THE BOOK: There had been a feeling hanging over me in the past few weeks, a feeling that change was coming. It didn’t click until that moment that change had already arrived. I was changing, things were changing, and I was finally okay – in fact, more than okay – with that. It was flooring, the idea I was looking forward to something more in life than Tetris and being cheered on by my friends. Those things still mattered, of course, but there was more, and I was enthralled there was more. FROM THE AUTHOR: Cross through the River Veil and into the world beyond the Star of Time in the Starlight Chronicles, a young adult epic fantasy series from C. S. Johnson. Be on the lookout for Book 4, Remembering, as Hamilton and his fellow superheroes continue to fight evil and get their schoolwork finished!Perfect for young teenagers or disaffected college students, or adults who enjoy some satire mixed in with some star-crossed lovers and high school drama! WHAT REVIEWERS ARE SAYING: Once again, this book features a less than likeable main character, but we are seeing his grow and change and mature (just a bit) since the first book. This book has the benefit of being right in the middle of the story right away.  ~ Stephanie, Audiobook Enthusiast and Goodreads ReviewerThis series just keeps getting better and better, with new characters and a deeper story unfolding. ~ Terri, Emerging Author and Goodreads Reviewer

Author Bio:
C. S. Johnson is the award-winning, genre-hopping author of several novels, including young adult sci-fi and fantasy adventures such as the Starlight Chronicles series, the Once Upon a Princess saga, and the Divine Space Pirates trilogy. With a gift for sarcasm and an apologetic heart, she currently lives in Atlanta with her family. Find out more at http://www.csjohnson.me.