You are here: Home / Horror / Summoner of Sleep 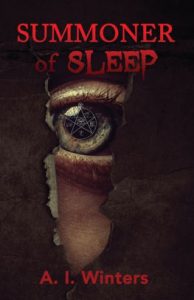 About Summoner of Sleep

A dark family secret. A town that doesn’t exist on any map. An elixir that will unleash an apocalyptic, transformational horror on the world.

In the isolated mountain town of Marble Woods, the townspeople harbor a dangerous secret. It’s here, away from the civilized world, that they can experiment with human genetics that have the power to alter your mind and body. When Ryder Ashling, a down-on-his-luck longtime sufferer of nightmares, discovers the town, he thinks he’s found a cure, but bears witness to their research and its terrifying, inevitable unraveling.

In exploring the disturbing crossroads of genetic manipulation and lust for youth and control of the physical, Winters’ cautionary tale of the perversion of natural order and desire will entice and rattle readers in this thought-provoking tale of terror.

A.I. Winters is an award-winning horror and fantasy author. Her titles include Summoner of Sleep, Strange Luck, The Nightmare Birds, and A Darling Secret.

Born in Northern California, Winters has since lived in every region of the country, but now resides in Los Angeles. She has published many articles on writing and publishing, and has worked as a grant writer and copy editor for non-profits, municipalities, and major corporations.

When not writing books, she enjoys breaking a sweat in Jiu-Jitsu class, baking desserts, and traveling.