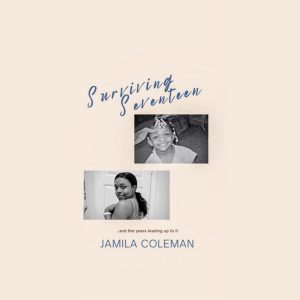 In “Surviving Seventeen,” Jamila Coleman talks about her seventeenth year of life, and how the few years before it aided in making it as strenuous as it was. Once a promising athlete who appeared as though she was on her merry way to a lifetime of nothing but success, along with coming from a seemingly well put together, religious, two parent home, Jamila’s life looked like a fairytale from the outside. She seemed to have it all.
But that was when Jamila was a child. Upon reaching her teen years, Jamila’s life began shifting, and she was exposed to situations that were not only hurtful, but were also hard to navigate and therefore, quickly took a toll on her. Young, naive, and barely having had any real guidance, Jamila starts trying to put herself together using the bad experiences she goes through, gaining insecurities and self-hate in the process.

Even then, Jamila still remained optimistic and hopeful for the future…until she wasn’t.
Seventeen was a whirlwind that smacked Jamila in the face. From her parents sudden split, to unemployment, a mental health crisis, apparent hyper-sexuality, an extreme weight gain, and a strong crave for something that was slowly ruining her, Jamila found herself asking “where did I go wrong?” a lot more than often.
Surviving Seventeen is a personal story that speaks volumes and has the ability to touch anybody that has suffered greatly with mental health, been a victim to emotional abuse, or just simply had way too much on their plate at a young age. While it focuses on the life of a seventeen-year-old African American teenager, the bigger picture of it is diverse in the sense that Jamila’s struggles aren’t immune to the rest of us, and we can all empathize with her while also getting a laugh or two as she tells her story in an upbeat, comedic manner.

Born in 2003, Jamila Coleman is an upcoming African American author whom attends Rhode Island College and is studying to become a sports journalist. Coleman discovered her passion for writing at an early age, and because of that pushed herself to see just how far she could go, despite how young she was. Now having accomplished her biggest goal to date—a book that was inspired by her own life—Coleman intends on writing more books that are not only shaped from her experiences, but also aim to help the world around her. Coleman is very invested in the idea of giving, and hopes that her books not only entertain, but also give knowledge along with motivate people to be better.