You are here: Home / Action & Adventure / The Amber Crane by Malve von Hassell 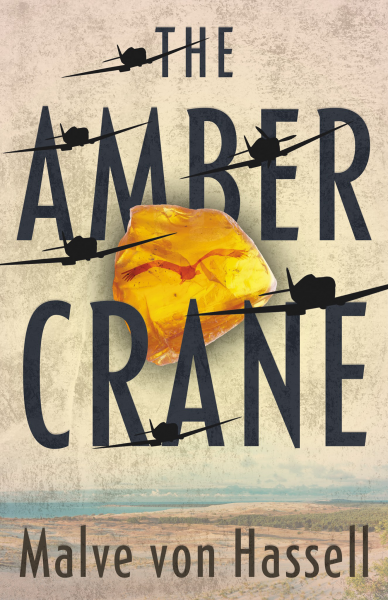 The Amber Crane pushes the boundaries of time-travel fiction and of your imagination in this tale of a journey from the past into the present, set in two devastating wars three hundred years apart and steeped in the lore and legends of amber from the shores of the Baltic Sea.
Clutching precious amber found in a clump of seaweed, PETER, an amber guild apprentice in Pomerania in the waning years of the Thirty Years’ War, has a choice to make. Despite the severe penalties imposed on such an action, Peter keeps the amber and works on it in secret, with potentially disastrous consequences for people close to him. Meanwhile, unaware of the amber piece’s magical powers, Peter finds himself drawn into a world three hundred years in the future where he gets embroiled in the troubles of a mysterious stranger.

Author Bio:
Malve von Hassell was born in Italy and spent part of her childhood in Belgium and Germany before moving to the United States. She is a freelance writer, researcher, and translator. She holds a Ph.D. in anthropology from the New School for Social Research. Working as an independent scholar, she published The Struggle for Eden: Community Gardens in New York City (Bergin & Garvey 2002) and Homesteading in New York City 1978-1993: The Divided Heart of Loisaida (Bergin & Garvey 1996). She has also edited her grandfather Ulrich von Hassell’s memoirs written in prison in 1944, Der Kreis schließt sich – Aufzeichnungen aus der Haft 1944 (Propylaen Verlag 1994). She has taught at Queens College, Baruch College, Pace University, and Suffolk County Community College, while continuing her work as a translator and writer. She has self-published two children’s picture books, Letters from the Tooth Fairy (2012/2020), and Turtle Crossing (2021), and her translation and annotation of a German children’s classic by Tamara Ramsay, Rennefarre: Dott’s Wonderful Travels and Adventures (Two Harbors Press, 2012). The Falconer’s Apprentice (namelos, 2015) was her first historical fiction novel for young adults. She has published Alina: A Song for the Telling (BHC Press, 2020), set in Jerusalem in the time of the crusades, and The Amber Crane (Odyssey Books, 2021), set in Germany in 1645 and 1945. She has completed a biographical work about a woman coming of age in Nazi Germany and is working on a historical fiction trilogy featuring Adela of Normandy.