You are here: Home / Mystery / The Armistice Killer 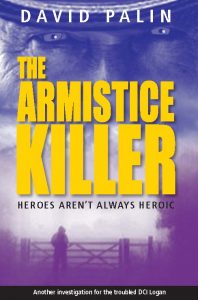 About The Armistice Killer

The plot of The Armistice Killer is as intriguing as the characters who stalk its pages all the way from Cornwall to Afghanistan. The bizarre and brutal murder of a military hero – retired RSM Tom Wright – sets in motion a complex investigation headed by the troubled Inspector Logan.
The detective’s prosopagnosia – facial recognition blindness – is almost the least of his problems as his overlapping inner demons and desires threaten his professional competence. But it’s not only faces that confuse Logan as he struggles to read the minds and motives of a compelling, dysfunctional cast of characters, where nobody is quite what they seem, including the murdered soldier himself. Yet Logan’s flashes of intuitive genius likewise constantly unsettle those who would remain faceless.
Can Logan and his deputy Pascoe keep on the trail of blood as it leads their investigation up more dark alleys – most of them blind, and some of them heading into their own disturbed pasts? The Armistice Killer’s parade of clues, red herrings, lies and deceits will keep you guessing to the last page.

David was born in West London and lives in Berkshire, UK. He is the author of several published novels, dark psychological thrillers, the publication of which has led to interviews on BBC Radio and in the local media. David is intrigued by the things that hide, often in plain sight, in the shadows beyond the light of our everyday lives. As a fluent German speaker and having studied English and German literature, he believes we are drawn to darker tales and imaginings.
David has collaborated as editor and co-writer for various authors, as well as producing screen treatments and screenplays (including one of his own) for writers whose novels have sparked potential interest from film producers.
Away from writing, David loves sports, music, the theatre and travelling, many of which have seemed like elements of a fantasy tale in our recent tough times!