You are here: Home / New Books / The Black Heart of the Station 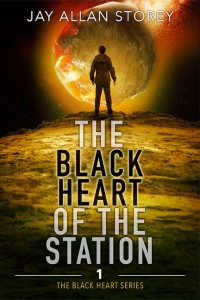 About The Black Heart of the Station

Delinquent or Prophet? Whichever one teenager Josh Driscoll is, he may be humanity’s only hope for survival.

Josh lives in The Station, a city buried deep beneath the surface of a frozen, lifeless earth, its origins lost in the mists of time. His frequent rule-breaking exploits are focused on a single question – how did we get here?

But Josh goes too far when he steals a space-suit and escapes to the surface to explore.

As punishment, the governing Council, of which his father is a member, forcibly enrolls him as a novice monk at Saint Carmine’s, the Station’s resident monastery. At first desperate to escape, Josh finds himself drawn into the monastery’s ancient texts.

Deciphering an encrypted journal hidden for centuries, he learns that the Black Heart, a mysterious complex sealed off after an ancient asteroid strike, may hold the answers he’s been seeking, and may be all that can save the city from certain annihilation. When the deranged head of the Council is determined to demolish the Black Heart and doom them all, Josh leads a desperate battle to stop him.

But can Josh and his tiny band of followers prevail in time to avert catastrophe?

Jay Allan Storey has traveled the world, passing through many places in the news today, including Iraq, Iran, Afghanistan, and the Swat valley in Pakistan. He has worked at an amazing variety of jobs, from cab driver to land surveyor to accordion salesman to software developer.

Jay is the author of six novels, and a number of short stories. Two new novels are in the works for 2021. His stories always skirt close to the edge of believability (but hopefully never cross over). He is attracted to characters who are able to break out of their stereotypes and transform themselves.

He loves both reading and writing, both listening to and playing music, and working with animals. He’s crazy for any activity relating to the water, including swimming, surfing, wind-surfing, sailing, snorkeling, and scuba diving.

Jay is married and lives in Vancouver, BC, Canada.