You are here: Home / New Books / The Clock Tower Treasure by Victor Hess 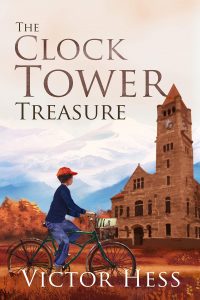 About The Clock Tower Treasure by Victor Hess

Book 2 in Jesse’s ‘Searching for Family’ series presents a new story that dovetails nicely with the introductory book but adds even more elements of intrigue and suspense to its tale. This approach will satisfy middle grade readers who want an expanded vision of Jesse’s pursuits, life, and growing interactions with the world around him. The book picks up at the point where Jesse’s future changed in Jesse Sings.

Jesse has only lived in Sabina for a year and has just begun to put his life together when upheaval threatens again. His mother is determined to become less dependent upon his unpredictable father’s child support payments, and has made decisions to move on. But Jesse is not sure he really wants to let go, especially since he’s built the beginnings of a new life after much initial struggle.

As marriage, disappointment, broken and revised family connections, and small life challenges emerge, such as finding an appropriate Father’s Day card for one who is less than predictable, Jesse finds new ways of accepting changes and redefining his life and expectations of family ties.

At the heart of both these Jesse books is this process of revision, contrasting ideals with reality not just in Jesse’s life, but the family structures of his peers.

The past can’t be changed, but as his mother brings a disparate group of broken siblings together for the first time and embarks on her own journey to change everything, Jesse and his reader receive invaluable lessons on change and confronting myths and realities both within his community and on a broader perspective.

The contrast between Jesse and Lynn’s perceptions of family ties and their meaning is particularly well done, as is the threat of polio’s life-changing effects on both community and individual lives.

Jesse’s involvement in the mystery of a hidden treasure and the clues he unearths in a courthouse clock tower and Biblical verses are nicely juxtaposed with the adjustments and achievements he experiences in his own life.

How he handles both results in an engrossing story that builds upon Jesse Sings, yet moves in a different direction as Jesse absorbs the lessons of history and heritage during a treasure hunt that promises even more options for positive change.

The stalwart, determined character of Jesse and his struggles that range from economic to spiritual and social crafts a full-faceted story offering more realistic elements and depth than most sagas about family developments and changing times.

“Middle grade readers will be thoroughly immersed in Jesse’s objectives, perceptions, and changes. They will find this second book in the series even more compelling than the first, as Jesse makes the most of what is handed to him and continues his growth momentum.” – D. Donovan, Senior Reviewer, Midwest Book Review

The second book in the Jesse Hall’s Search for Family series, The Clock Tower Treasure, has just been released and available on Amazon and at book stores

As a former businessman and before that a Bomb Disposal instructor in the U.S. Army, he now lives near New Orleans with his wife and dog where he writes full time.