You are here: Home / Featured Books / The Darkest Gift 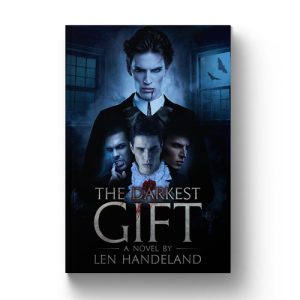 About The Darkest Gift

When a Gay man—Jack, who struggles with his own sexual identity, meets elegant yet incredibly mysterious Laurent Richelieu, he thinks his stroke of bad luck with men and women has ended. Or is it the beginning of a nightmare?
As the two begin their courtship—Jack encounters horrifying experiences involving vampirism, paranormal experiences, and possible reincarnation, making him question his sanity. The more time Jack spends with his mysterious European love interest Laurent, the more revealed about the dark secret awaiting Jack. Are they destined to be together? —does Laurent honestly care for Jack? Or is there a more sinister plot involved with the addition of two other vampires from Laurent’s past, Stefan and Fabien? Can the help of a self-described Voodoo High Priestess, “Queen Raphaella,” alter Jack’s predestined future, or is his fate already sealed? From 18th century Paris to the later part of 20th century New Orleans and Haiti, where vampires become real, and spirits appear, and where physical and spiritual love survives all odds and good engage evil in an unwinnable battle.

Len Handeland is a dynamic writer who specializes in fiction, specifically vampire, paranormal, and crime drama novels. Len has always enjoyed writing and is drawn to being creative—as far back as he can remember. Back in middle school, when he and his classmates were assigned a book report, and the others groaned, Len cheered—not only being given an exciting novel to read but also to compose the essay assignment as well. Everything had to be perfect, the spelling, grammar, and accuracy regarding the subject matter. Later on—in his late teens, Len attended FIT in Manhattan studying fashion illustration; years later, he decided to pursue a career in the hair industry using his artistic training and creativity to excel in hair. He decided to pursue writing after reading many of Anne Rice’s work (having read all of her Vampire chronicle books) and after having attended many creative writing classes and attending the San Francisco International writers’ conference—decided it was time for him to write a Vampire story of his own; in his words, given Len’s affinity for vampires. A different story—where love and companionship is the only thing that matters.
Len is currently working on his second novel which is entitled “Requiem for Miriam” a murder, crime, drama, set in Manhattan, Westchester County, New Orleans, and Mexico in the 1980s. He hopes to have his second novel released at the start of the new year (late January, beginning of February 2022)
When Len isn’t writing, he enjoys reading and enjoys vegetarian cooking. Some of his other hobbies include hiking, biking, and billiards. He enjoys the performing arts and has trained in Martial Arts for over 25 years. Len lives in Palm Springs with his husband, Byron, and their two tuxedo cats, Felix & Felicia (brother and sister)