You are here: Home / New Books / The Dawnbreaker Gambit 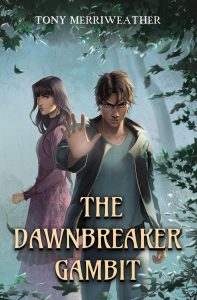 About The Dawnbreaker Gambit

Troubled by nightmares of his forgotten childhood, fifteen year old Damian Grayscale enrolls in the prestigious Helix Academy, known for producing powerful mages. His only connection to his past is a powerful Vampire named Lana who changes careers to become a teacher at his new school. He quickly settles into his new routine as he meets new friends and rivals that push him to improve. But Damian soon realizes that grudges don’t die easily. Over a century ago Vampires went to war with his home country Reshion and lost, but they’re finally ready for round two and Damian’s efforts to stop a new era of war will put him on a collision course with the monster responsible for his fractured memory.

He started writing seriously in 2019 in the back of his friends Chevy, and he’d be the first to say it sucked. Now he’s at least somewhat decent and strives to share his stories with the world. If he’s not writing he can be found gaming on PC and Console while thinking about all the work he should be doing.