You are here: Home / Horror / The Giggling Grandma with the Lizard Eyes 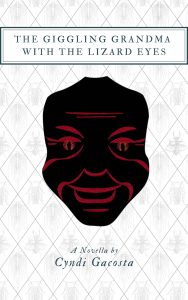 About The Giggling Grandma with the Lizard Eyes

The bizarre death of an ordinary family man catches the attention of detectives Jorge Cabrera and Elise Alvaro. It bears an eerie resemblance to the deaths of several others—each and every corpse were found bloated with insects. Each shared one common connection: Darling Ross, a warm-hearted grandmother and five-time widow. One afternoon, Cabrera and Alvaro pay a visit to Mrs. Ross at her humble house in a cozy rural town in southern California. With her bubbly personality, Darling welcomes the two detectives into her home and fixes them a cup of coffee with a side of her delicious homemade cinnamon buns. As Cabrera and Alvaro interrogates sweet Darling, a sense of queasy unreality sets in. Then, the world around them begins to bend and twist into a living nightmare.

Cyndi Gacosta is a Filipino-American horror writer from southern California. Her stories and poems have been published in several indie literary magazines. She currently lives in Korea with her husband and enjoys her free time writing stories that she hopes make people feel queasy and uneasy.